I just recently watched Knowing, an awful movie starring Nicolas Cage. Don't bother seeing it - it's one of those movies that looks really cool and dumb, but the end result is an overwhelming mess that'll make you wonder why you wasted 2 hours on such an unsatisfying piece of crap. Trust me on this. Don't be fooled by Roger Ebert's glowing appraisal of the movie. The disasters are rather unconvincing, and Nicolas Cage winds up being largely ineffective. I don't mind inaccurate sci-fi movies with inane concepts such as digging into the moon's core to find molten gold creatures, or seeding clouds with hurricane-generating pills. The fun comes from the B-plots trying to wrest any sense of shock from the normally static handsome main roles indulging in overblown explanations for whatever's going on. But I expect some kind of intellect to go along with the scene. I enjoy shows better when they're based on good bad science, not bad bad science. I want to be mentally entertained. When the movie dialogue and script are so painful that I can't bother to make it past the first DVD chapter, that's a bad sign. (In olden days, this would before the first reel)

So why am I bothering to talk so much about a movie I didn't like? Without revealing any of the so-called "plot twists", there was a moment early on when the movie lost me from the sheer absurdness of the premise. It wasn't the scene where the silent girl was writing down numbers that voices were telling her to. It wasn't the absurd overblown ritual given to the importance of burying a time capsule. No, what lost me was the exchange between Nicolas Cage and his precocious kid. They were having an exchange outside on the barbecue (not important), when the father said something to his son behind his back from a distance of maybe 2-3 metres away, and the kid turned around and said something in response before going back inside the house. One scene change later, we find out this kid's been wearing a hearing aid all this time. Then Nicolas Cage starts doing sign language in front of him, saying how much he loves his kid. Can you tell what's wrong with this picture?

Every other scene prior and after showed no indication that the kid was deaf, other than he was mostly silent. However, when people talk to him, he acts like a normal kid, with no indication that he's even deaf. The only reason he's wearing a hearing aid in the first place is because he's been hearing "voices" eerily similar to the prophetic girl at the beginning of the movie. That's not a sign of being hard of hearing - that's a sign of schizophrenia. In the end, his deafness is totally irrelevant to the overall plot, and just something the director threw in. For all the effort that Hollywood makes in being sure the details of their background and wardrobe of their characters are accurate right down to the rivet, there's still little niggling things that drive obsessive types nuts. It might be songbirds not being indigenous to the region the story's taking place. It might be weather looking unlike any kind of precipitation. (Hollywood snow looks nothing like real snow) In my mother's case, it's deafness in the movies.

Being deaf in one ear isn't exactly like being blind in one eye. Either you can hear properly, or you can't. If you want to communicate properly with a deaf person, it's important that you face them head on, so they can understand you. It's also best if you use gestures to emphasize certain key words, so they'll understand what you're talking about. Nicolas Cage does none of this with his kid. Every other scene of the two of them together or apart, has them talking normally, side by side, as if he's a normally hearing kid. If you're talking to a slightly deaf kid, every little bit helps. No attempt is made to illustrate what Nicolas is talking about in order to make his message clearer. Then again, Nicolas Cage is so reluctant to talk to his more mature kid about anything, that any dialogue between the two of them becomes moot. 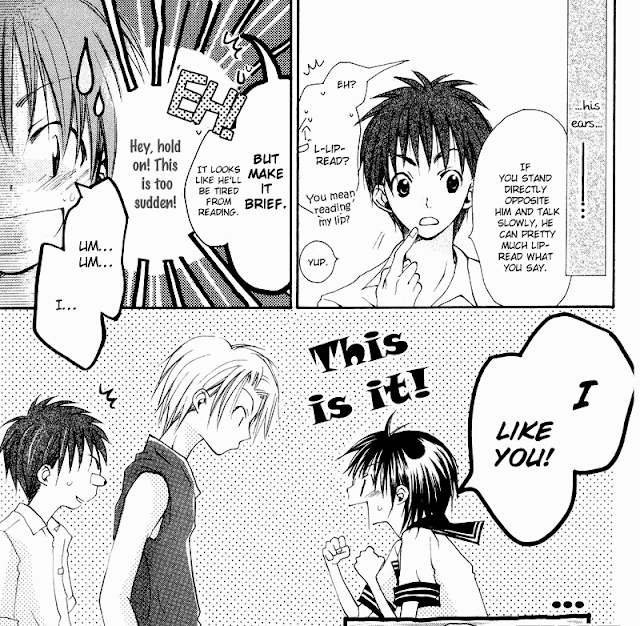 As a movie critic noticed, having a disability gives Hollywood writers license to give them natural superpowers. Blind Samurai can detect the whereabouts of an assassin from creaking floorboards and shallow breathing. Autistic Savants can calculate Pi up to a million decimal points. Deaf people can lipread from a distance of 5 miles.

However, the truth is far from the reality. It's actually harder to lipread than it looks. Sue Thomas FB Eye is able to easily understand what people are saying just by looking at them carefuly. But even though she's based on a real person, they've taken a lot of liberties with the concept. Oftentimes, the speaker will mumble, or there'll be facial hair blocking the lips, making it harder to make out what they're saying. Even the most experienced lipreader will encounter difficulty, since so many words look alike (carpet / armpit), or the mouth doesn't move much in relation to certain words. A tobacco executive talking about "Nicotine statistics" is equivalent to seeing somebody talking with lockjaw. This isn't because they're lying through clenched teeth, but because the mouth moves so little. Equally hard are suffixes, such as words ending in “ing” or “s”. With such few visual cues, I often need input of slight sounds in order to fill in the gaps. More examples are talked about in What's that Pig Outdoors? (Can you guess what this means? Answer at end of post) 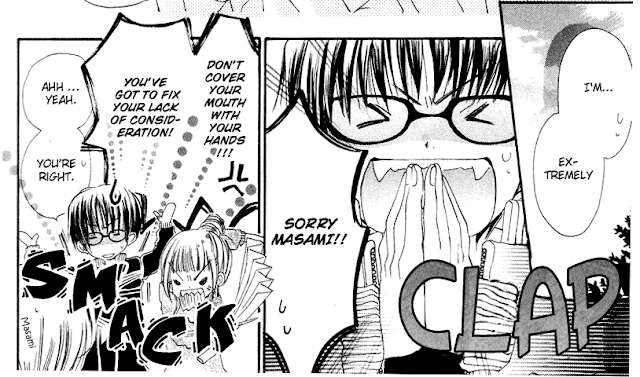 Even when a speaker is told to emphasize their words when talking to a deaf person, chances are they'll very quickly revert back to normal speech when talking to somebody else. Even if that second guy is standing right next to the deaf person, the deaf will have immense trouble understanding, since they're no longer taking the time to talk clearly. Even more aggravating is when they turn away, since people are so accustomed to hearing conversations in the background that they completely forget that hearing isn't as easy for some of us. Trying to lipread a conversation between two or more people is like watching two movies on opposite sides of the wall. You have no idea which one to look at first, when they're going to pass their next turn, and no idea if something important was said. Have you seen people talk down to children, then revert back to normal speech in the company of adults? It's the same principle, though I don't need to be talked in simple kindergarten terms. Using gestures to illustrate your points and replacing difficult words is recommended. 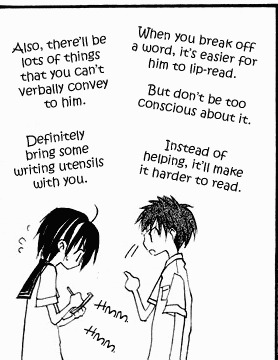 Part of the reason there's not much accurate display of deaf people is that there's a very vocal group who worry about losing any of their Deaf culture. The belief that if deaf children start learning how to use oral speech, their sign language will die out, and it'll wind up being a lost language. While they don't object to people who grow deaf later in life to be fitted for Cochlear Implants or Hearing aids, they're adamant about giving the same benetits to young children just starting to learn language. One particularly erroganeous example of self-preservance is a Deaf lesbian couple who wanted to genetically raise a deaf child. This is equivalent to two blind people poking out the eyes of an otherwise healthy seeing baby so it'd be better integrated into "their world" of blindness. The claim that when the deaf child grows older, they'll be able to make their own choice for how they want to live in life is a fallacy. Having grown up with only one way of communicating, would anybody suddenly develop a desire for bilingualism without practice? This is why people have difficulty reading lips at an old age, because they've been ingrained with listening all their life, and have no experience on how to cope without instruction. Why would a deaf child who'd grown up with sign language and no auditory experience want to immerse themselves with something they're totally unfamiliar with?

Some other movies that get on my mother's nerves:

In Tin Man, the main character is born deaf, gets a cochlear implant and when he wakes up in the hospital after his surgery, he can hear the IV tube dripping. This is impressive, because it takes a month to heal and then he needs a speech processor and go through rehab first. After getting speech therapy. in a very short time he speaks as well as a hearing person. This is impossible since he was born deaf, and most deaf people have a certain accent to their speech. Then he makes a phone call and says he got his ears fixed. Just because you can "hear" doesn't mean you can correctly decipher everything properly. You've got to learn how to sort out all the normal noise from the background noise as well as other annoying sounds that can't be filtered out.

Mr Holland’s Opus portrayed the oral approach all wrong. The child doesn’t get any hearing aids or speech therapy and yet, he's expected to speak without help. It shows sign language as the panacea and oralism as abusive.

The greatest offender is Children of a Lesser God, because of the same reasons as above (oralism is abusive, sign language is panacea). Also because the speech therapist who should know better tries to teach a deaf woman to speak at the age of 21 when the prime language learning years are 0 to 5. Not to mention it’s impossible for a profoundly deaf adult to learn to speak intelligibly if she's never spoken before in her life. 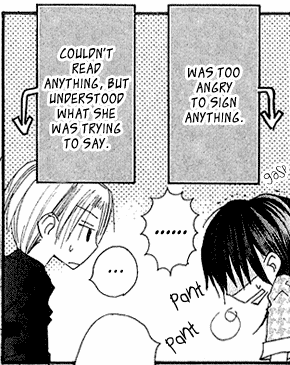 It's also why I'm so disappointed with Kingyo Sou, a Shoujo Manga about a girl interested in a deaf guy. (Whose scans I've used here) I'd hoped that we'd be shown the mental anguish of somebody coping with hearing loss and only finding an outlet through rhythemetic music. Instead, we're given the typical stoic but silent guy who has a percussion complex with a Taiko drum. Communication starts out with face-to-face dialogue, but soon reverts to handwritten postcards. Ask anyone who've tried to maintain this method for a long time, and they'll contest that it was a pain.

It's even more hilarious in hindsight, when you consider how ubiquitous cellphones in Japan have become. Even though the story takes place fairly recently, they're not used very often. Using the internet as a communication tool for even easier deaf conversations is only used when the deaf guy goes overseas. Just because the girl is bad with computers is no excuse for not taking advantage of the latest technologies. MSN and message boards are quite a far cry from the clunky teletypewriters (TTYs) that were the only way deaf people could communicate over the phone. Even without TTYs, there's still Telecommunications Relay Service, which can transcribe either written or spoken dialogue between two people on the phone. Granted, it could be a little embarrassing having mushy lines spoken through a confidential third party, but that option's still open.

Oftentimes, when I talk to people and I don't understand something, rather than bug them for every time I don't understand a word, I usually just smile and nod, pretending I understood, so I'd get the conversation moving along in the hopes that I'll pick up the pieces later. Its usually a struggle to put everything together, and I usually ask for a summary after everything's over.