Stan Lee may be trying to revive his failing reputation for creating new ideas with turning Schwarzenegger into an action figure, but he’s got plenty of competition to deal with. Considering that Schwarzenegger was already a caricature before entering politics doesn’t help much. However, of all those He-men clones, I’m willing to bet that none are as equally crazy as Red Ketchup.

I’ve mentioned him briefly before, but figured it was worth another look. One thing to understand about Red Ketchup is that he was created in the 80's during a time when action movies were focusing on Rambo-style protagonists. Keep that in mind when reading the end of this short story summary. 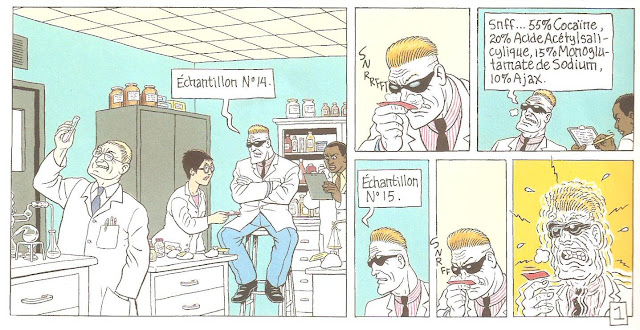 In this opening, we see how Red Ketchup’s skill in determining drug quality is so advanced that he can tell exactly what the drug samples are made up of just by snorting them up his nose. 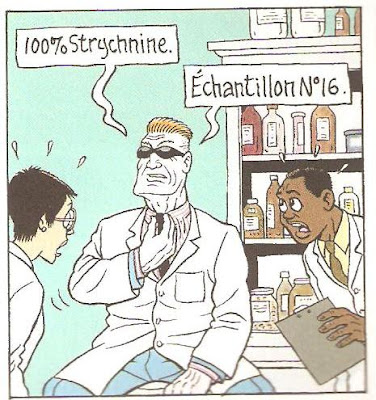 That’s right. Inhaling strychnine does nothing more than give him a mad rush. Elsewhere, his boss is talking with two men who’re specifically requesting Red Ketchup’s services. (To simplify things later, I’ll be referring to these guys as Man 1 and Man 2) His boss is reluctant to give him up, since Red Ketchup has a tendency to be overzealous in any job, and he’s hoping Red’ll get an overdose in the narcotics lab. It’s only when he gets a direct order from the President that he opens up. He leads the two men to the testing site when they find their man lying on the floor. 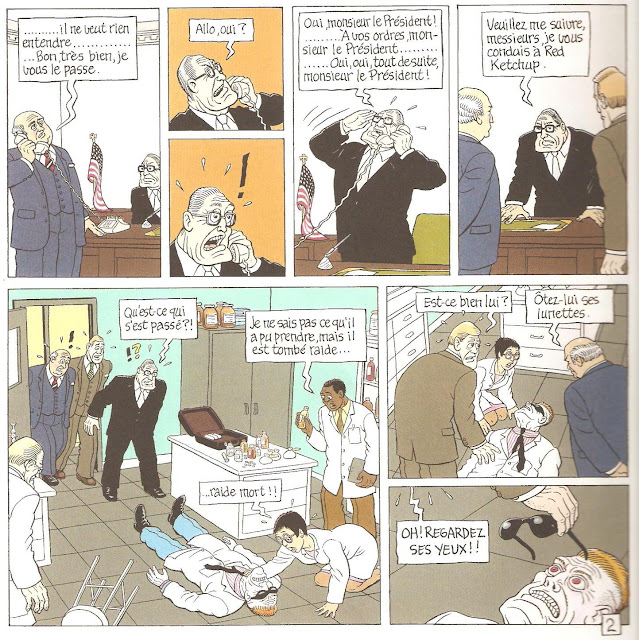 The chief isn’t too concerned, since he’s happy to see ketchup out of commission. But that only lasts until Red Ketchup wakes up screaming and starts acting like a ditzy Anime girl looking for her glasses. 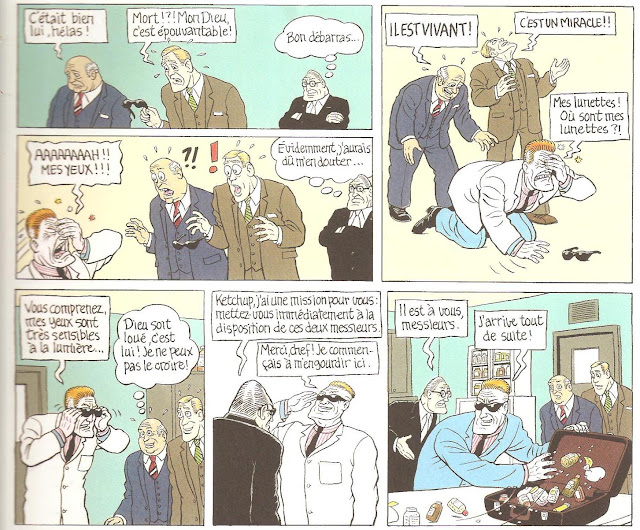 We also see why Red Ketchup wears sunglasses all the time. It’s not a fashion statement, nor just to appear more imposing (his red eyes alone would be unnerving enough), but because of his albino upbringing, he's very sensitive to bright lights. After his boss informs Red Ketchup that he’ll be going with these men for his next mission, he gleefully affirms, while bringing a few pills just in case he’ll need them later.

Red Ketchup’s brought to the a building where an old man only referred to as "Grand Master" asks to see his eyes. Red Ketchup obliges, at which point, the Grand Master falls to his knees, much to his confusion. The Grand Master explains that Red Ketchup’s a dead ringer for a knight who played an impressive role during the Crusades. 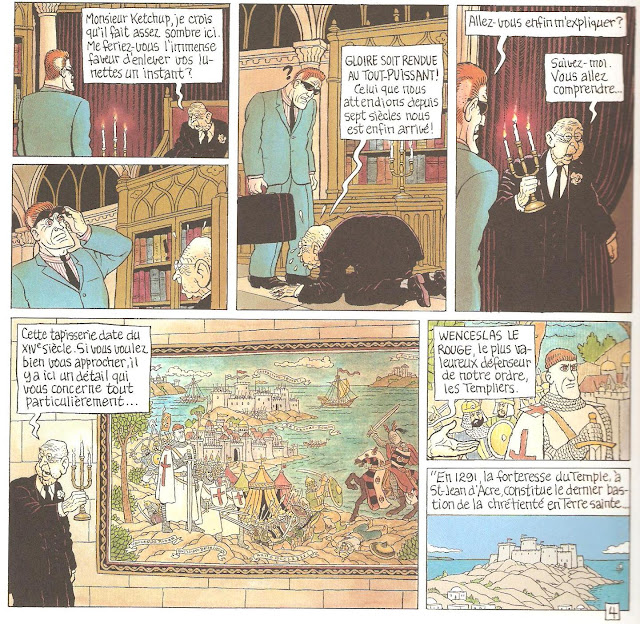 While the Grand Master goes on to explain the history of this crusader, Red Ketchup takes a few more pills to pass the time. 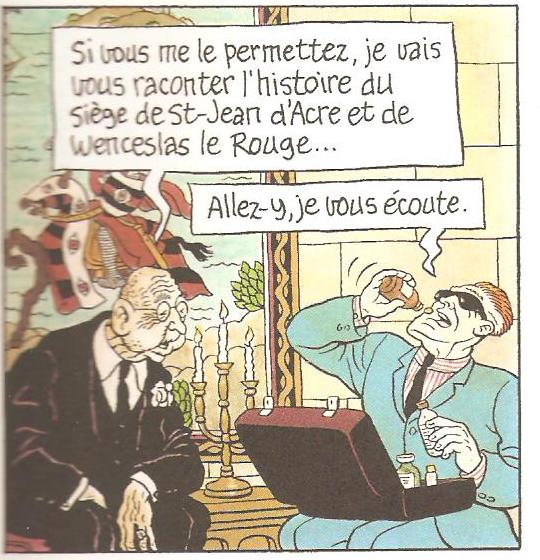 This crusader, Wenceslas the Red made an impressive assault scheme to bring himself over to the defending castle site. He describes how he mowed his way past dozens of soldiers and launched himself over enemy walls using their own catapults. 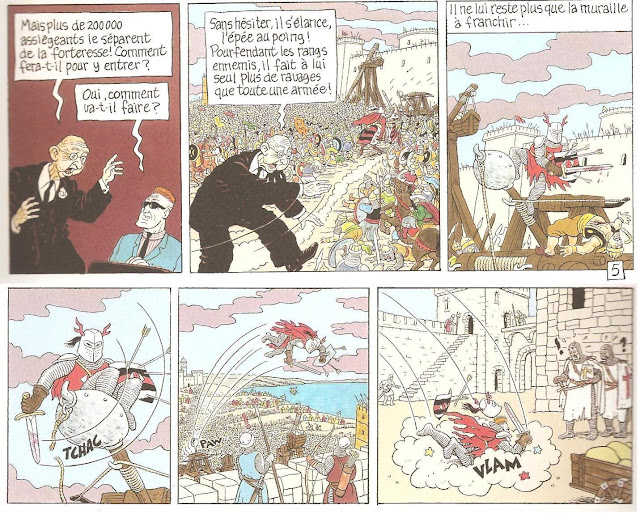 Once Wenceslas the Red was part of their battle formation, their sieges became legendary for being unbeatable. He was only stopped when a mirror in the Muslim camp was deliberately aimed to shine bright light into his eyes. After a blood-curling scream, the enemy was able to inflict a mortal wound on Wenceslas the Red. As he lay dying, he made a prophesy that in a year, disaster would strike the Pope, the King and the Minister. There’s a lot of text that I’m struggling to understand, but the basic gist is that there’s a secret organization named The Saint Order of Templars, a kind of Freemasons-like brotherhood. The Grand Master is head of this centuries-old tradition and now wants to employ Ketchup’s likeness for a ritual wearing Wenceslas the Red’s artifacts. 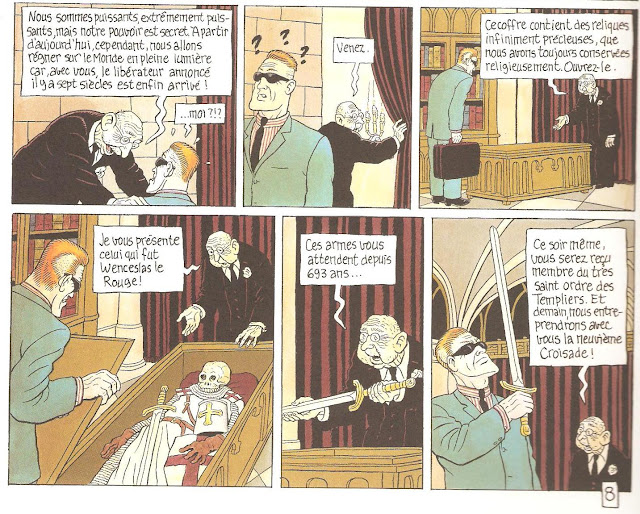 Once suited in his garb, the Grand Master informs Red Ketchup that according to the ceremony, he would be contained in this room for nine hours before he could be released. However, this turns out to be a bad choice, since almost immediately, Red Ketchup starts getting antsy from a pounding headache. 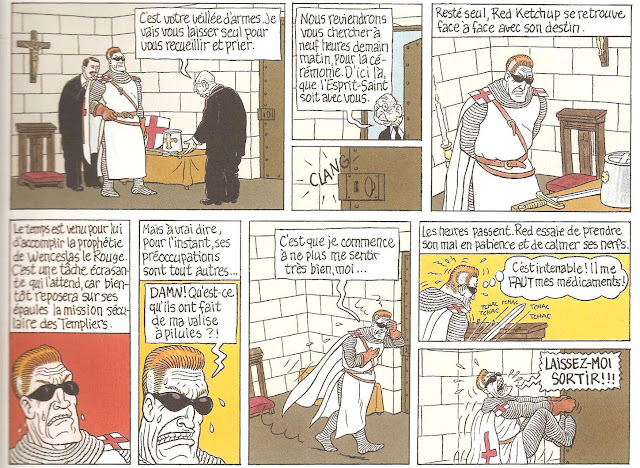 "Damn! Why didn't I bring my pills?" This, after he's already consumed more medicine in a day than most people take in a year. By the time the Grand Master has asked for his presence, Ketchup’s decided to take matters into his own hands by formulating his own means of escape. 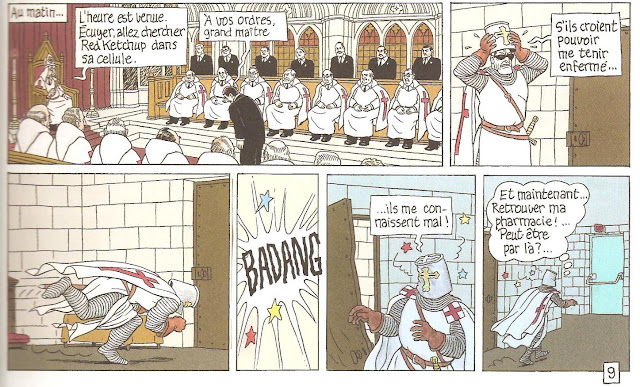 Upon his first sign of freedom, he immediately high-tails it for the nearest drugstore to relieve his pains. After feeling better, he happens upon a TV announcement of Arabic diplomats entering the country, and gets the idea in his head that he’d better go there. 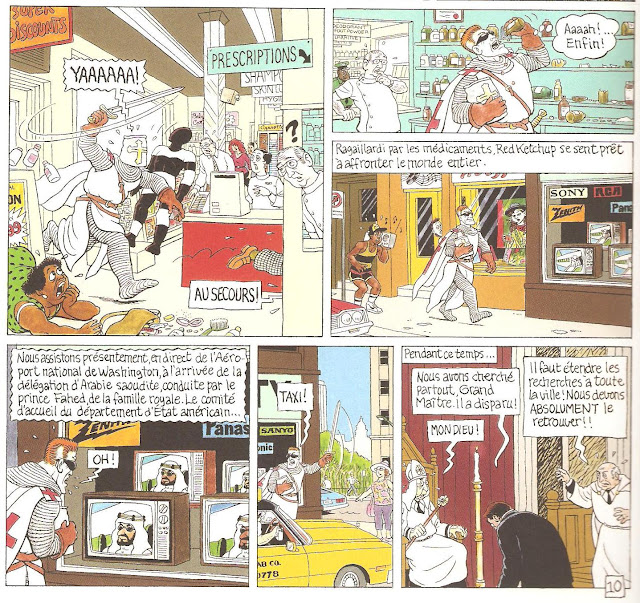 The conference is interrupted by a man in medieval armour yelling “Death to Infidels!” at the top of his lungs. Considering that Red Ketchup lops off a policeman’s hand off in the process, he’s completely lost himself into his role. Nevermind that his antics are completely inappropriate for the current century. Upon hearing that a knight bearing Wenceslas the Red’s likeness has been found at the airport and airport security has been alerted, the secret society is a little upset. Of the two men who requested Red Ketchup, Man 1 tells Man 2 to come with him in garb similar to Red’s. 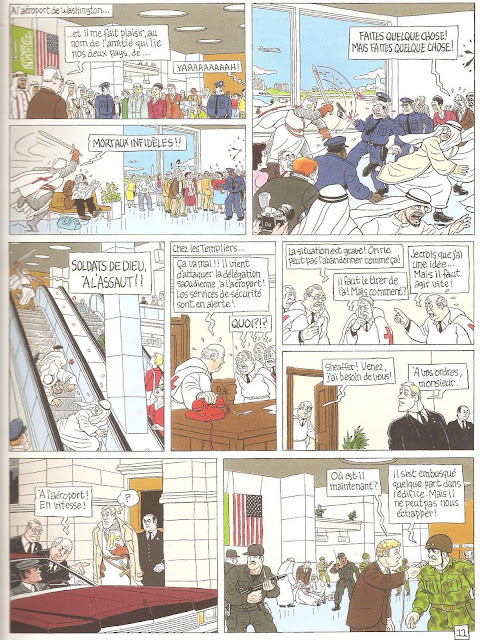 Man 2 is considerably confused as to why he’s in this getup at the airport. Man 1 tells him to go out there with sword in hand. Man 2 wondering what all this is in aid of is immediately found by the security team upon which he’s shot upon sight, thus ending the menance. 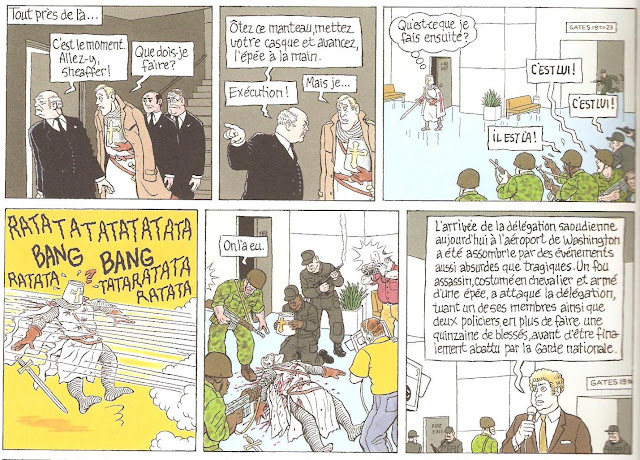 But where is Red Ketchup? Turns out he was in the one place that no one would suspect a mass murderer with a religious signatia to be hiding:

Amazingly, this isn’t even the most controversial thing Red Ketchup’s done. I’ll be exploring his personal genocide against a certain species in a future post.
Posted by DeBT at 7:08 PM