Sorry for the lack of updates lately. I’ve been working on a particularly long essay involving European scanlations. In the meantime, Mike Sterling recently posted an entry about one of my favorite childhood commercial icons that people seem to want to forget; the Noid. 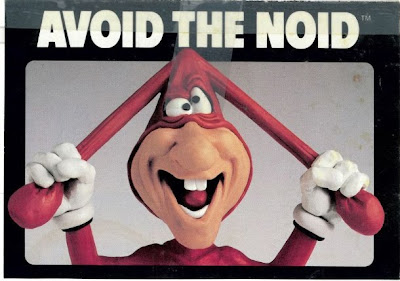 The Noid is kind of a weird character in that he’s on a constant quest to destroy every pizza out of existence, but for some reason, always fails with trying to break Domino’s pizza boxes. Like Wily E. Coyote, every tool the Noid uses backfires on him in a hilarious way. Good thing he never advanced further than lifting up the edge of the box and eating the pizza itself. (Then again, considering the size discrepancy, the Noid could just as well comedically burst his stomach before finishing his first pizza)

While looking up speedrun videos of the Yo! Noid game on Youtube, I was surprised to find out that it was originally based on a game involving a Ninja and his falcon; (Masked Ninja Hanamaru) which explained why the Noid was collecting scrolls with his yo-yo.

Like Super Mario World 2, Yo Noid! used another game template to boost its popularity. Unlike SMB2, Domino should’ve used another game to steal their template from, since Ninja Hanamaru was notoriously difficult, and the gameplay was particularly unforgiving. It was only after seeing the Youtube videos that I found out that by randomly jumping and hitting certain areas (like Wonderboy in Monsterland) you can make hidden scrolls appear. This is only compounded by the fact that these levels are timed, so you can’t go willy-nilly hitting everything in sight. And these things have to be hit twice - one to make them appear and again to show their contents. Not to mention that there’s several warp spots that’re invisible to the obvious.

Even with all these faults, I thought it’d be a good time to post some relevant historical information about the origin of this wacky character. These pages were found in an old issue of Animation Magazine. The Wiki page hints at a controversial hostage issue that’s also mentioned here: 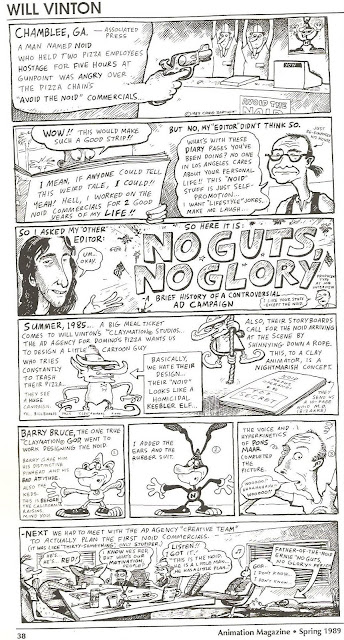 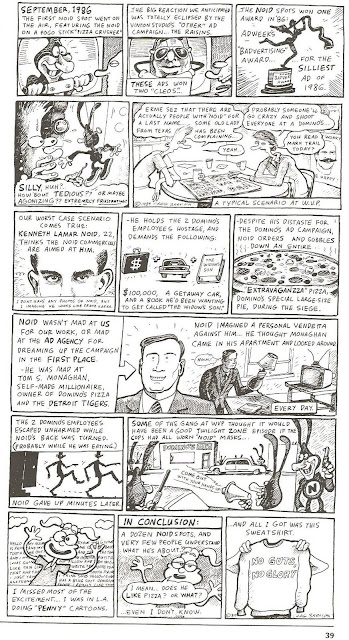