Earlier this week, I was getting ready to learn the ropes for an upcoming part-time job at the MOSD (Montreal Oral School for the Deaf). I was waiting for the time to leave to catch the transportation that would take me to the workplace where an interpreter would be available. Even though the workplace deals with teaching deaf children how to speak, it's still preferable for me to have an interpreter present so I can understand what I'm supposed to do without having to repeat back everything. (Despite people's perceptions, being an interpreter isn't exactly as easy at it sounds)

The interpreter is only really necessary for my first day on the job. Once I've learned the ropes, and understood my supervisor's mode of speech I don't need them again, unless there's a meeting or something.

However, before I could even get to my workplace on time, I had to face an additional unexpected hurdle - passing my Mother's dress code. Even though I'd already planted my shoes at my workplace (I'm very fussy when it comes to footwear - I like my shoes to be flat), my Mother was appalled with my choice of clothing. It had nothing to do with my shirt, sweater or pants, which I'd carefully prepared the night before and made sure that each garment was freshly-cleaned and hadn't been slept in. No, what really rankled her was my choice of socks. Apparently, I decided to go with the cardinal sin of wearing white socks to go with my black shoes.

I thought that this was a presumptuous argument, especially since my designated job was a desk assignment, and I wouldn't be moving around much anyways. Not to mention that I didn't think people were going to be so finicky as to do minute close-up inspection of people's feet to make sure that everybody was up to code. My mother countered by saying that I should look it up online. A customary search revealed that opinion was evenly split, with some people feeling that buying black socks to go with black shoes was a capitalist plot. Others felt that it was a crime to mix two different colours together, since white socks were for sports, and black were for business.

In the end, I didn't change socks after all. I don't like changing socks either way, since it usually takes me about two minutes to put them on. Depending on how they're shaped, the memory of how you wore them is etched into their form, and making sure that they're placed properly on my left or right foot takes a long time. Of course, it was all moot, since the day that I arrived for work was also the day of the biggest snowstorm that we'd encountered in a long time. 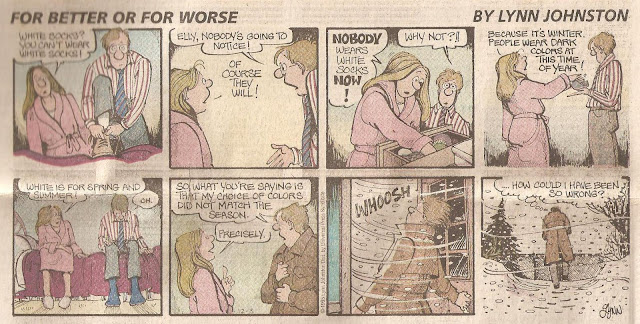 As I expected, nobody bothered to look down and see my mismatched crime against fashion. It helped that my pants were long enough to cover my socks anyways. Still, that didn't stop me from trying my best to keep perfectly still so they wouldn't ravel up and reveal my pale ankles. But I don't think anybody noticed. I'll try again next time, and if I haven't been strung up in an effigy, I'll take that as a good sign.
Posted by DeBT at 10:50 PM