Sorry for the lack of updates lately. I’ve been preoccupied with the New Year’s party. Unlike most people who celebrate when the big ball goes down, my family is content to celebrate the day after, when traffic isn’t as bad, and everybody can converge together into one location. That location being my parent’s house.

Its an extremely stressful time of year every time, because not only do I have to help with the foodstuff, such as peeling multiple potatoes (which I love to eat, but hate to prepare), I also have to help with the cleaning up, since most of my stuff is still there. That includes cleaning my room, which despite multiple visits, is still something of a mess, much to my mother’s annoyance.

I don’t like getting rid of my notes, since they’re the closest thing to a journal entry I have around here. I live by the principle of out of sight, out of mind. If I don’t see it, it doesn’t exist.
I was able to make some more room in the closet by getting rid of most of my College documents on Library Science. The main reason I studied how to be a librarian was so I could find books without having to ask the library patron how to do so. I’m notoriously private, and don’t like having other people know what I'm looking for. The second reason was so I could find several children's books I read as a child again.

It’s a shame - I kept those homework assignments for years out of fear that I would be called out on my credentials of being able to design a catalogue file properly, and I never had to. I graduated years ago, and I never double-checked my notes. Ironically enough, when my sister turned up to determine whether she should throw out her old doodles on scrap paper (which filled several boxes over the years), my mother suddenly had a change of heart and didn’t want to let any of them go. 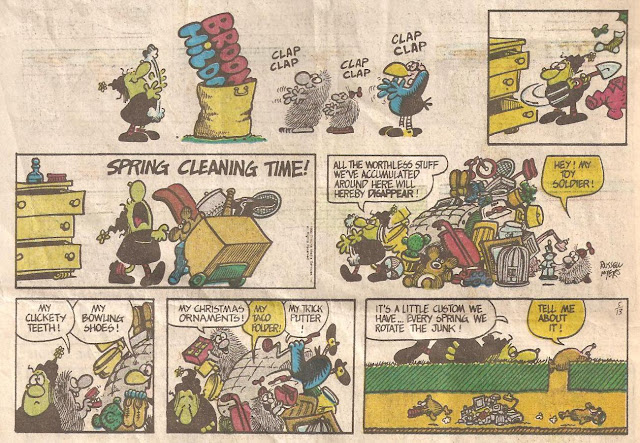 With Dirk Deppey’s sudden layoff, and his announcement for his vacation time, I missed the chance to post a relevant Herman strip in accordant to his final words. 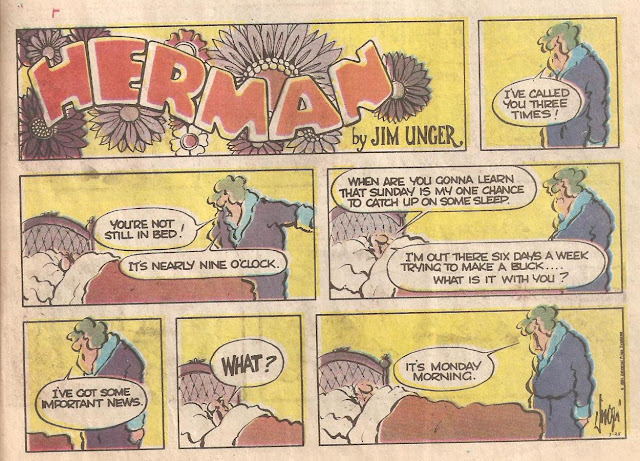 Since I missed my shot with Dirk, I might as well share a similar anecdote from one of my Uncles. He worked with cows all his life, getting up as early as 4 in the morning to 10 at night to make sure they were milked properly. So when he decided to make things a little easier for him and go into semi-retirement, his cows were the first to go. After making sure they were auctioned off to reputable owners, he still wasn’t finished, because there were still people who wanted the rest of his cow tool instruments. (The milking kind, not the Far Side kind) He stayed awake for two days straight without sleep, making him a prime candidate for Jack Bauer's partner. When everything was said and done, do you know what he did? He was so tired that he slept for only TEN hours. When I first heard the story, I thought he slept for two to three days straight. It wasn’t until I verified this anecdote with the man today that I confirmed his version of events. Hearing the truth of an otherwise good story kinda ruins it somewhat.

Another story I heard about tiredness was from a friend of my sister. She told me of somebody who was extremely exhausted after a long bout of schoolwork without a break. There were multiple instances of this guy nodding off at inopportune times like some kind of narcoleptic. This created all kinds of trouble such as his suddenly falling asleep during class, meetings, on the bus and (maybe) while eating lunch. The most notable example was where - and this is only by hearsay mind you - the guy fell asleep while taking a shower. This isn’t exactly up there with Michael going to the shower dressed, but it comes close. 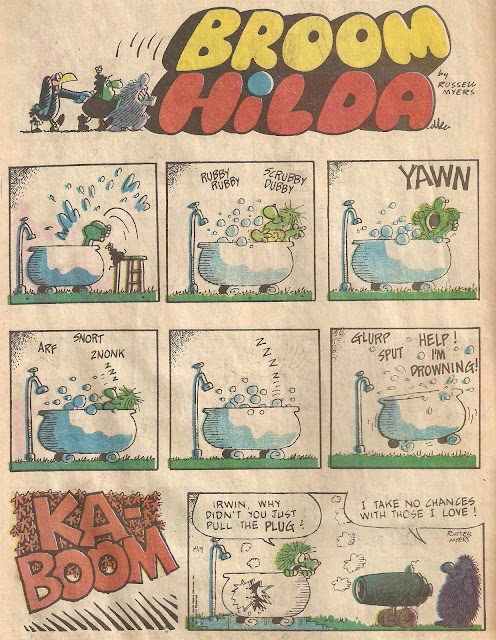 Every year, I get more and more disillusioned at what I haven’t done. It seems like everybody else is more accomplished than I am. Whether it’s getting a job, publishing a book or drawing a comic, I haven’t done much more than the skeleton prototype of notes built out of a selection of ideas hastily scribbled down on the back of candy wrappers. To quote Dr. Manhattan from Watchmen, the rest of the world keeps moving forward while I’m standing still.

Apart from the Garfields that I’ve sent off to the Sqomg site, my contributions to the comic world is still minuscule. Every year I resolve to be more serious in writing creative stories. And every year, I keep getting distracted by other things such as TV shows, webcomics and video games. I have overly ambitious ideas that I need collaboration with to bear fruit. Unlike the claim that anybody can learn how to draw if they apply themselves, I have no control over my handwritten motions. My handwriting has remained virtually unchanged since I was a grade schooler, which made writing cursive a major chore. Not to mention I have no patience for developing what little art skills I have. Whenever I put to pen something I have in my mind’s eye, I’m so disgusted at my results I don’t want to try again, for fear of contaminating another piece of paper.

Rather than try to torture myself with resolutions that won't stick, I should try to keep to a schedule that I have a more realistic goal of accomplishing. That's the theory anyway; but I keep wanting to do the things that're nagging me at the back of my mind. If I didn't pressure myself to do these side projects, they'd never get done in the first place.

The best that I can hope for is that I update this blog at least once a week. If I can manage to increase that to an average of three times a week, I'll have exceeded my quota.
Posted by DeBT at 5:17 PM