Been awhile since I talked about Sunday comics, even though it's the theme of my blog. Figured I should return to that well again, before I diverge off into tangents about other comics. 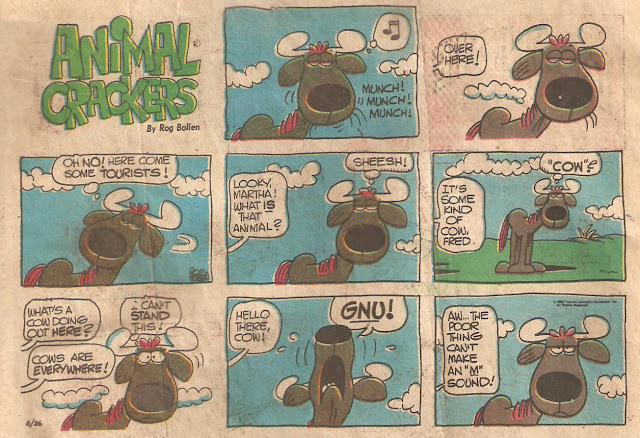 I only had the strip Animal Crackers for a year before it was replaced by Doonesbury when it came back from its hiatus. For a long time, I thought Animal Crackers was just one of those strips that'd made their brief appearances before disappearing, much like so many other comic strips. So when I decided to check for any more information about the strip online, I was surprised to find out that it was a legacy strip with had a long history. It first made its debut in 1967, and was drawn by Rog Bollen until 1994, when it was overtaken by Fred Wagner. 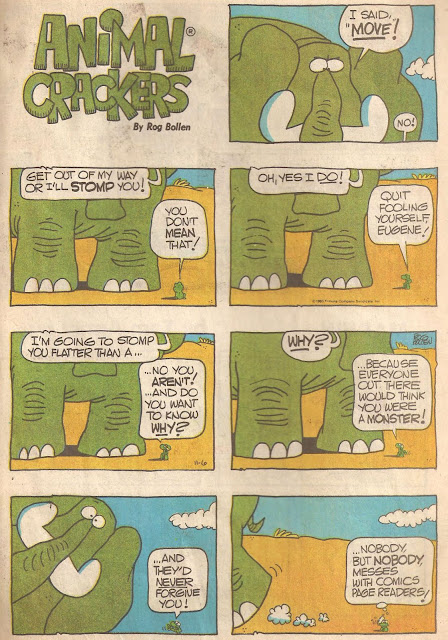 Of the characters I was familiar with, the wiki page also described another character I'd never heard of, Lana, the supposed love interest of Lyle Lion. Until I read her entry, I wasn't even aware she existed. She only appeared in one Sunday strip, and wasn't even facing the camera in that one, which leads me to think that she wasn't a major player in the Sunday strips. 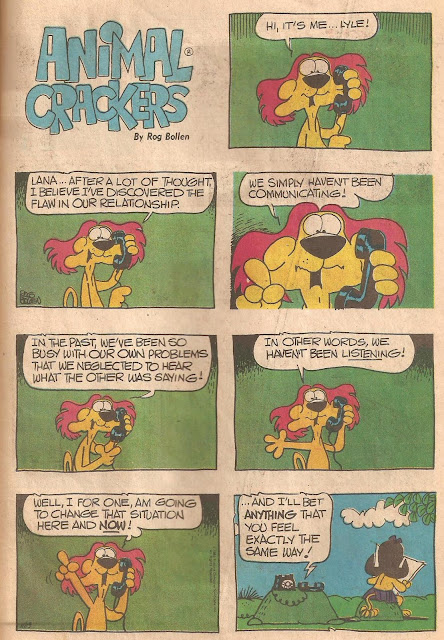 Other reoccurring characters were the highest-jumping peeper frog, a snake similar to BC's, and a sponge. When an inanimate piece of plant life gets more attention than a woman, you've got your priorities elsewhere. 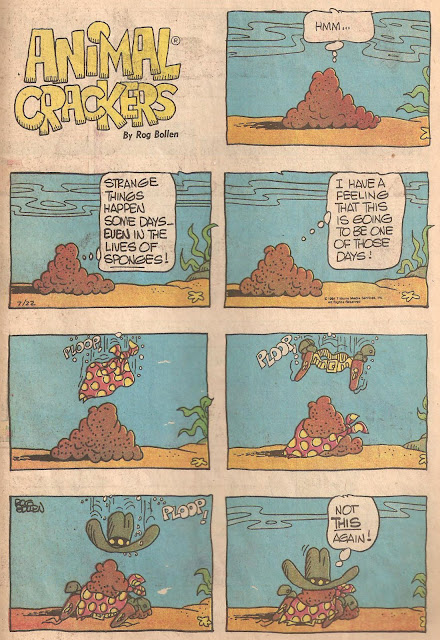 For a jungle populated only by animals, it certainly got its fair share of tourists. This woman was the only human you were likely to see on a regular basis. Because of her size and sunglasses, I thought she was a Hollywood director at first. 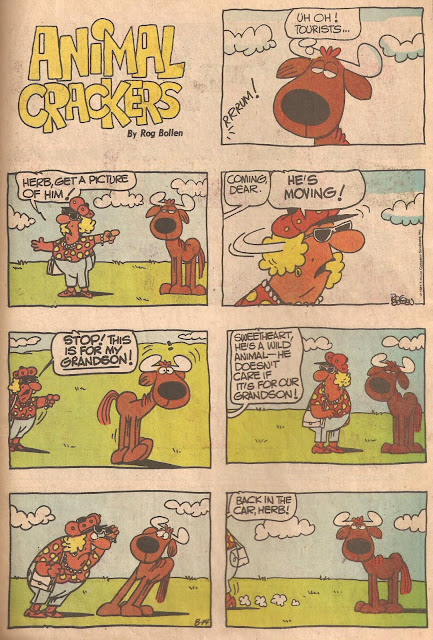 There were also attempts to "educate" the audience in a manner that was eventually mastered and improved by The Far Side. 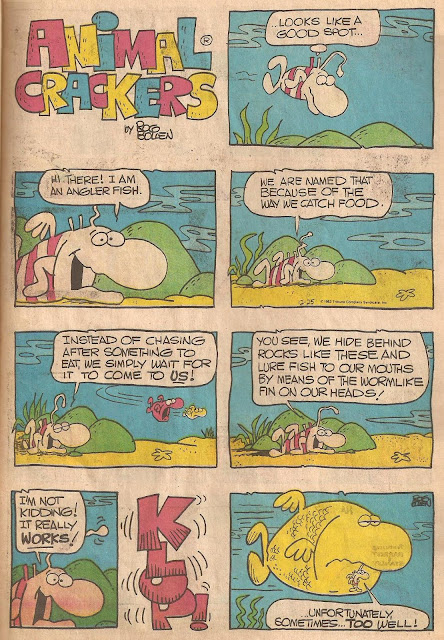 So why am I bothering to bring the memory of this strip back if it's not that good? For one thing, while the jokes may be rudimentary, the cartooning is still consistent throughout. Another plus is that the dialogue while simplistic, also feels natural. Also, I suspect that the crocodiles were a major influence for the crocs in Pearls Before Swine. 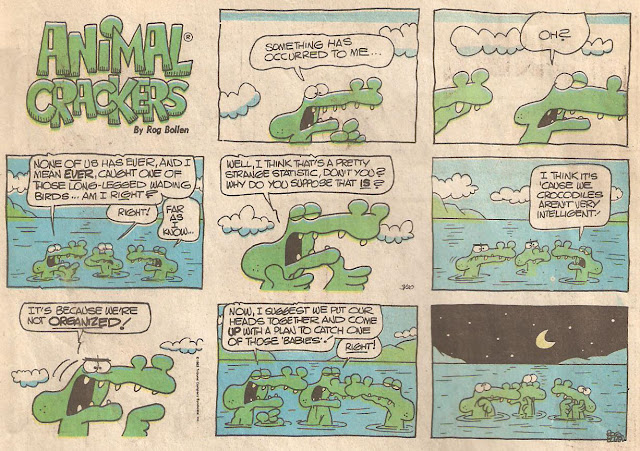 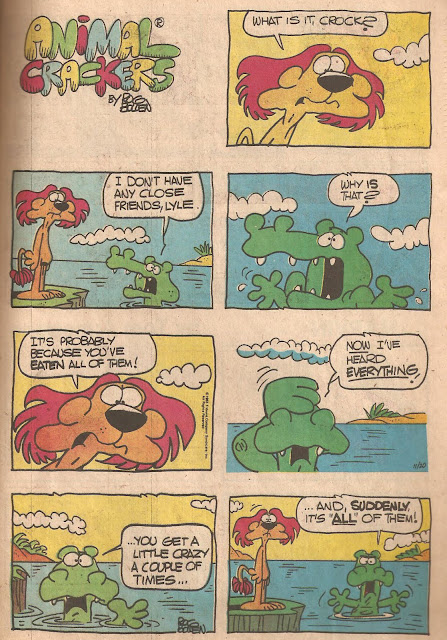 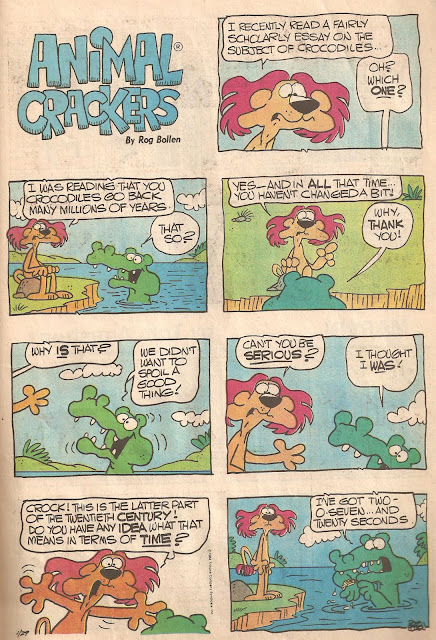 Part of the joy of reading old comics is finding how other comics have influenced others through subtle means. Sure it's easy to find a Calvin reference these days, but finding the bedrock for older strips done BC (Before Calvin) is a bigger challenge.
Posted by DeBT at 8:15 PM