Recently, the creator of Xkcd formally announced that due to a family emergency, he would have to take a slight hiatus from his popular webcomic. Despite this, he was still able to update his webpage with doodles of half-finished bad jokes. In light of his remarkable devotion to his fans, other cartoonists sprung out of the woodwork to contribute guest strips to help fill in the four-five month gap while he deals with his family illness.

I would've liked to contribute something myself, if not for two conflicting interests: 1. I'm an even worse artist than the Xkcd guy, which is saying something. 2. I don't have a webcomic page. Apart from my submissions to Square Root of Minus Garfield, I don't have much experience drawing comics. It's rather ironic, since I think and read about comics daily, and even envision writing an enjoyable comic that'll be read and reread for generations to come. But I utterly suck at drawing, when I can easily see the panel layout for a theoretical comic that doesn't even exist yet. Even the act of doing rough drafts tire me out.

I can never work myself to draw properly, because I'm always upset at how the comic character comes out. It never looks like the way I envisioned it to be. It makes it even worse if they're looking at me, silently demeaning me for warping their pure existence.

Cartoon: What are you doing? My jawline should be shaped rounder and my nose should be curvier!
Me: Sorry.
Cartoon: Oh great, and now you've completly drawn my arms out of proportion to each other! Are you trying to disfigure me?
Me: (clutching my head in shame) I'm sorry.

I could escape my fear of drawing eyes by drawing totally blank eyes in the same vein as Little Orphan Annie or the Sins from Jack. However, to me, it feels something like a visual shortcut, and not something I could build on. I've tried to break down my inepitude by focusing on one facial body part at a time, drawing it over and over until I get it right. It's easier when I just have to focus on one thing at a time. Then I'll be able to put all the pieces together in a way that makes sense.

Problem is, this approach fails me too, since I can never bring myself to stay interested enough to work on the details. Not to mention that drawing the same open mouth multiple times and not getting the same results I wanted is extremely demoralizing. For some reason, on the rare occasions that I can get a doodle to work exactly the way I want it to, when I think about it too much, I can't capture that essense I wanted again.

This is why I prefer to write instead of draw. At least if any of my characters say something stupid, I can change it to sound more profound and memorable. Still, this didn't stop me from trying to create crude drawings that could work. Every year, in order to save money, I would write a creative card for my parents' birthdays and Mother's/Father's Days. Thing is, I could never just create a card with a simple "Happy Birthday" in it, oh no. It had to have social commentary that would tie in to whatever current theme was happening around then.

One such example was around my grandmother's 91st birthday. Like any geriatic, she was rather shy about revealing her true age. I had two characters argue over whether it was ethical to create a monument to her surviving this long. Eventually, there was a scuffle over the banner covering the number, causing the hook of the "9" to fall off. When it hit the ground, it created a dense plume of smoke covering both characters as they looked in horror at the remaining numbers, which now spelled out "11". The soot-covered supervisor was going to say something about modifying the monument, when the designer said, "Forget it. It's too soon. Maybe next year."

It probably loses a little something in the retelling. I may post it online if there's any interest, but for now, I might as well show two Xkcd-style comics that I drew.

First up, I can't take any credit for the idea here. I found somebody's doodle of this page in High School, and was impressed enough to copy it and tape it on my bedroom door as a kind of warning of what would happen if anybody set foot in my room. Because, like one of my other signs said, "Occupancy of more than one person is considered unlawful and dangerous". I added the mutant fish, and the looping plot myself. 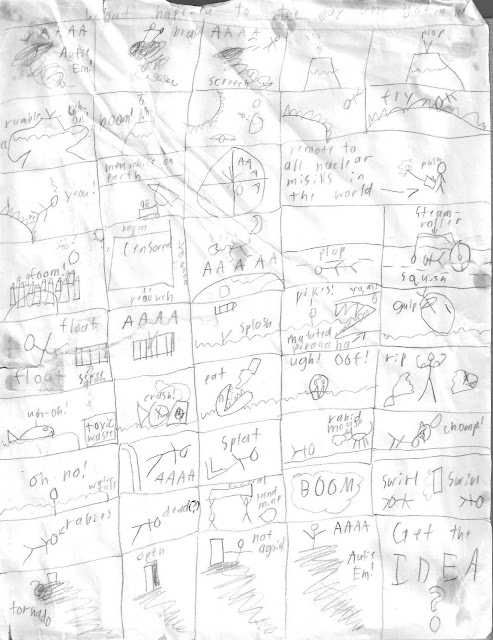 The other comic I drew for my Mother's birthday was a rebus that I thought she'd be easily able to decipher. Sadly, I grossly underestimated her capacity to understand pictures, and had to explain it to her. My sister who's an artist and a comics fan was able to understand it instantly. 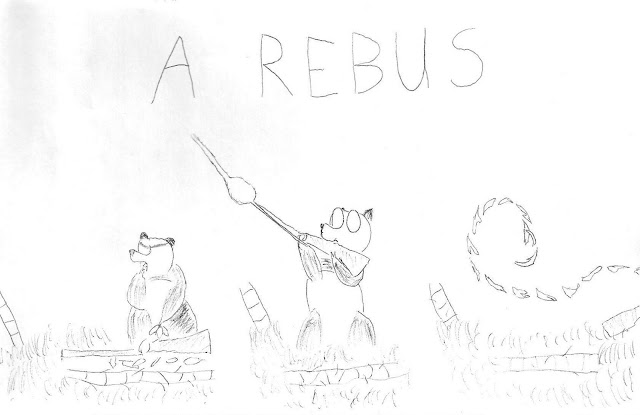 For the less observant among you who remain baffled, maybe this link will give you a clue. But don't click or highlight it until you've considered every option. The fun of puzzles is figuring things out in the end.

Of course, the real reason I posted these up here was that I had no guarantee that my comics would even be accepted, and didn't want to take that risk. After all, what would Randall Munroe have to gain from linking to my blog? My comics don't have any mathematical relevance to them. Not to mention that I have no real desire to redraw my comics again. The panda one was hard enough.

Conversely, I’ve heard of artist who suffer from the opposite problem. They can compose scenes of elaborate poetry in their images, but they can’t tell a story to save their lives. There has got to be a way for these authors with visions and artists with talent to get together somehow.
Posted by DeBT at 2:29 PM