I seem to have a kind of knack for finding rare books that I like. I was lucky enough to find garage sales that sold old collections of Sunday comics of For Better or For Worse and Herman, especially since they're no longer printed anymore. I even found some old Pogo books of original stories that weren't in the newspaper for $0.25 each. (I highly recommend Pogo's Peek-a-Book, which has two of the funniest stories I've read that had a direct influence on Calvin & Hobbes) In that same bookstore, I passed up five issues of the colourized Akira comic, issues 1, 2, 13, 19 and 27. Incredibly enough, I later found those very same issues for sale at a garage sale just outside my jurisdiction. That led me on a serious comic-hunting spree to find the rest of the series once I got the most expensive issues cheap.

Some months ago, I was doing some book-hunting at library booksale looking for bargains. After finding several out-of-print children's books, I didn't want to leave just yet, because I felt a slight buzzing in the back of my head that gave me the sense that there was still a good book lying around, just hiding in plain sight. Then, tucked in a corner of the non-fiction section, I saw the title Stolen Innocence, a biography about growing up in a polygamous society. I figured my mother would like it, since she enjoyed the first three seasons of the HBO series Big Love, a kind of cross between Desperate Housewives and the Sopranos. Once I found it, the buzzing stopped and I was able to pay and leave.

Prior to that, I made an amazing discovery. Buried somewhere in the humour section was a collection of Doug Wright's editorial cartoons. Knowing that Doug was finally gaining some respect in the comics field by having his Nipper comics reprinted, it seemed too good to pass up.

It feels a little unusual seeing Doug's normally silent people giving lengthy monologues in a New-Yorker style of speech. It's the same problem I have when reading Groo - I'm so used to Sergio's pantomime that Evanier's script seems overly redundant. Most of the comics are in the very dry joke category, rather than the laugh-out-loud kind. Not to mention that despite the title, many of them are hardly political at all. They seemed more like large one-panel strips that could fit comfortably between Hi & Lois and The Family Circus. Except that there's no reoccuring characters; it's a different set of people and location every time. The closest it gets to an editorial comic is a meeting between Nixon & Trudeau, who're doing each other's makeup on live TV. What this is supposed to mean is anyone's guess.

The front cover isn't much to look at, but it's the back cover that's the main selling point. I'm always amazed at how much effort artists put on the unseen portion of a cover, when they're likely to be overlooked. Most online bookstores don't even bother with the back cover unless it's covered with reviews of glowing praise from multiple sources on how good the book is.

There is one saving grace though. There were three pages about a cartoon cat, whose philosophies seemed pretty much spot on. It's radically different from any of the other strips in the book and seems to be done for a special in the Spectator magazine it originally ran in. For the sake of saving anybody's bank accounts from having to pay for an overpriced book online just to see the best parts, I'll be reproducing them here: 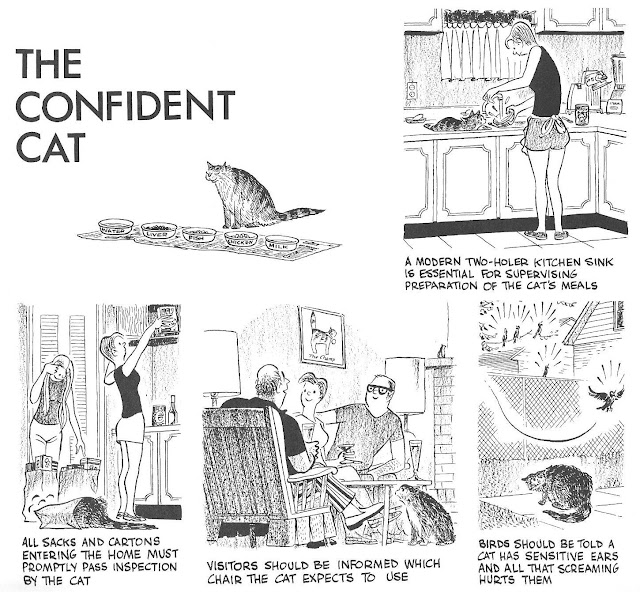 The cat's exasperation in the next-to-last panel there is very reminiscent of Sheldon from The Big Bang Theory. Even better when you consider that there's a children's book titled All Cats have Asperger's Syndrome. This could tie in to how Sheldon could relate to cats when his "girl-not girlfriend" didn't want to see him anymore.

Next up is a perfectly explainable reason for why cats are constantly wanting to go in and out of houses, seemingly on a whim. 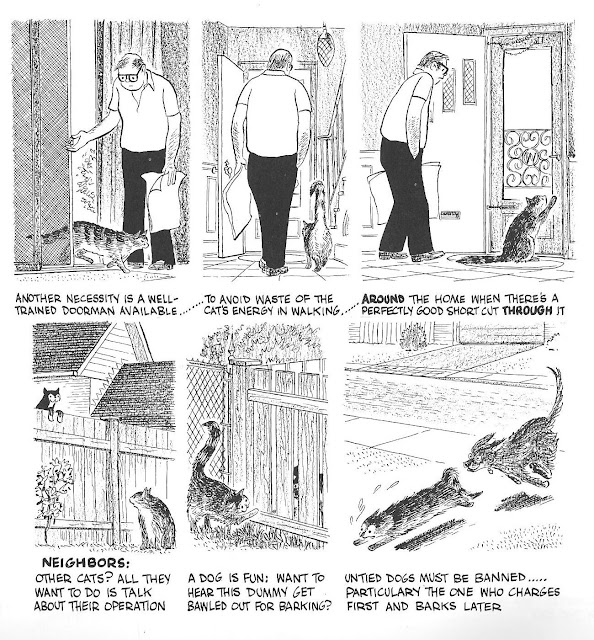 The dog in that last panel there is modeled exactly how Farley in For Better or for Worse tended to run. Goes to show just how influental Doug Wright was.

Pay special attention to the upper left hand corner of the next strip... 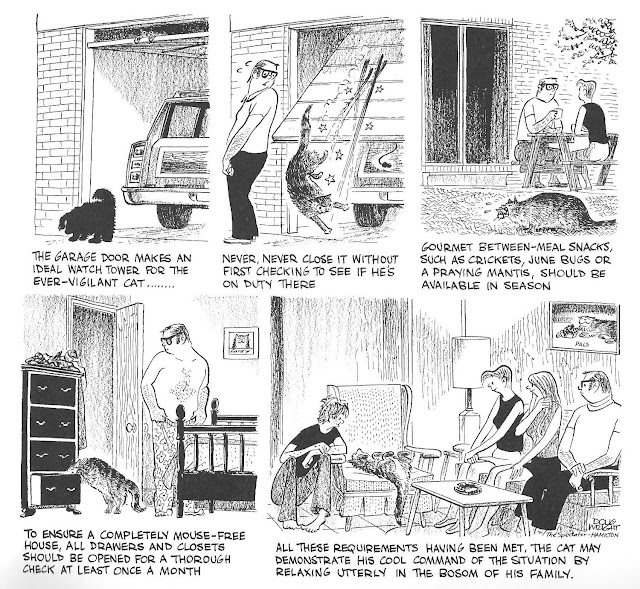