Despite being part of Hagar's home life with his intellectual son, amazon daughter, and overbearing wife, we don't know much about Hagar's best buddy / crewmate. 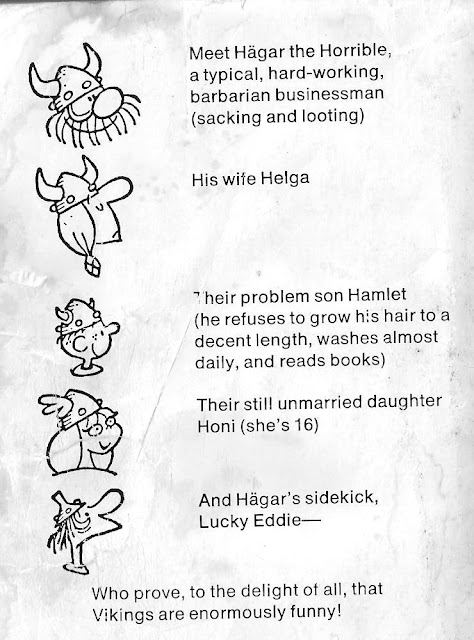 After a certain amount of time, creators may feel the need to explain the most basic elements of a long-running comic character, such as Superman emitting Super-hypnosis through Kryptonian glasses to appear as frail Clark Kent. Or revealing Songoku as a space alien to explain how he could keep fighting despite being hurt and having a monkey's tail. Uderzo may have butchered the Asterix line with his latest atempts at storytelling, but at least he hasn't tried to explain why Asterix wears those expressive wings he wears on his helmet. (Goscinny did tell how Obelix fell in the Magic Potion though)

However, daily Newspaper comics don't have to concern themselves with continunity, since consistency is more important to their readers. So a new element can be revealed about a character without actually changing or contradicting anything that's already been said. 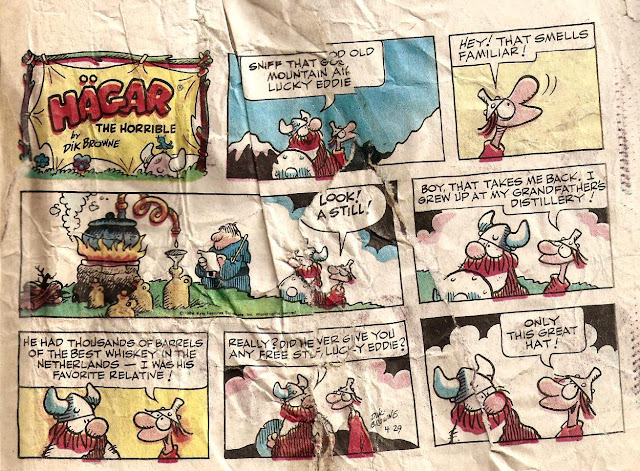 Sorry about the quality of the strip here. This was before I learned how to repair book bindings (I was still 10, gimmie a break), and I figured that even if the quality was lousy, I could still remember the original content. It never occurred to me that I would be sharing it with other people years later. For those of you unable to read the first panel, Hagar is saying, "Sniff that good old mountain air Lucky Eddie." Likewise, in the penultimate panel, Hagar is asking, "Really? Did he ever give you any free stuff Lucky Eddie?" 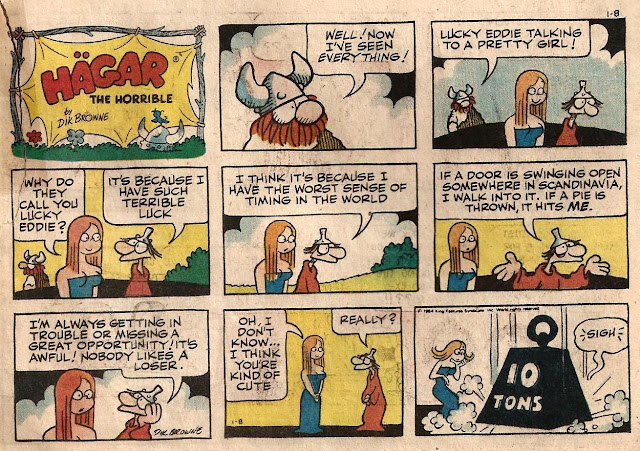 Even though he's always called Lucky Eddie, the meaning of his name wasn't apparent to me until this strip. (Don't worry, he gets better.) The nature of his bad luck might've been alluded to in previous strips, but until it was pointed out here, I wouldn't have picked up on it otherwise. After all, when you think of suffering, it's Hagar at his wife's hands. (Depending on the context, he usually deserves it)